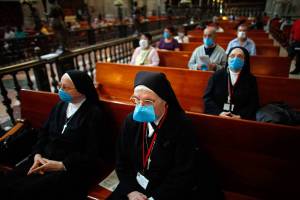 Recent comments from our Vice President about the swine flu or A1-N1 caught my attention as I am sure it did yours.  The Whitehouse had to rephrase his comments (of which I am sure they will do again)  about avoiding subways planes, or any close areas and head for an open field and calm the fears of people when it came to this flu which has hit the world in  pandemic proportions. Now it seems that the swine flu is old news and we hardly hear about it.  But I saw the analogy in many Christians relationship with the world, meaning the people of this world.

You always have to be careful to the way you define the world. The world can be the actual planet on which we live which the Bible teaches belongs to the Lord (Ps. 24:1; Isaiah 66:1-2).  The word “world” also can be translated age or a time period. The  Bible calls this present evil age  in which the the small “g” god of this age Satan, rules over the minds of unbelievers  (Gal 1:4; 2 Cor 4:4).  In fact, the world can also refer to the order and arrangement of the system of evil or the “age of this world” that seeks to seduce people away from God and attempt to hinder the cause of Christ (Eph 2:2-3).

It is obvious that it is the world system that is controlled by Satan and his lies that with which we should be concerned. Although, people who do not know Christ as Lord and Savior are living lives controlled by sin, we are to love them and lead them to the Savior, not to be afraid of them or catching something from them.

Because such were some of you…

In these areas I see people who say they are Christians going to several extremes.  Either they feel they can have one foot in the world and one foot in the church, meaning that they want to be able to say they are Christians and believe at least some of the tenet’s of the Christian faith. But they have made a grave error which is submitting to the “world system” that is controlled by Satan and his lies (Eph 2:2-3).  You cannot ally yourself with this world system or you end up being an enemy of God (James 4:4). But the Bible makes it clear that we need to stop acting like people who do not know Jesus Christ as their Savior (Jer 10:2; 1 John 2:14-16).

Then there are those who act so afraid of the world  they seem monastic and pietistic in their approach to it.  They even develop an attitude which says, “I am holier than you” (Isa. 65:5). I think at times we treat unconverted people  as though they were going to infect us with a virus of  sin.   This kind of Christianity is anemic and weak and they need to reexamine their lives in light of scripture.  We forget that we are still tainted with sin ourselves and were it not for Christ we would be in slavery to its power.

Jesus said that he overcame the world. “These things I have spoken unto you, that in me ye might have peace. In the world ye shall have tribulation: but be of good cheer; I have overcome the world.” (John 16:33).  He did not say that we would be free from trouble and suffering. Bright sunshine and hard rain still falls on the righteous and the unrighteous. The scripture insists and that we must go through “much tribulation” before we reach our heavenly home (Acts 14:22).

It is only “in Christ” and in his his words that we can have peace. There is a rest that comes to us knowing that the welfare of our souls are in the hands of the one who said,  “I give unto them eternal life; and they shall never perish, neither shall any man pluck them out of my hand. My Father, which gave them me, is greater than all; and no man is able to pluck them out of my Father’s hand.” (John 10:28-29).

This phrase “in me” is a loaded phrase. We are “in Christ”  the last Adam, the new life we have because of him as opposed to “in Adam” or the old man, the previous way of the sinful life.  The word “in” means a location or position. We are in Christ spiritually. What could this mean? We are positionally in Christ, God has saved us in Christ before the world began. That means that we were in him, together in him, joined to him before the very foundation of the world. That gives me peace in the midst of the storm.  What seems bad or what seems good to us does not matter when we know God in his sovereignty and providence is causing all things to work together for good (Romans 8:28).