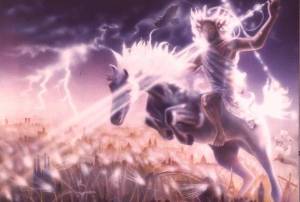 “It is not surprising that the Puritan movement in England believed so firmly in revivals of religion as the great means by which the Church advances in the world…When the Holy Spirit is poured out in a day of power the result is bound to affect whole communities and even nations. Conviction of sin, an anxiety to possess the Word of God, and dependence upon those truths which glorify God in man’s salvation, are inevitable consequences….to the Christians of that era, however, the explanation was entirely different. They read in Scripture that when the Spirit is poured from on high then the wilderness becomes a fruitful field [Isaiah 32:15].

They read also, ‘Not by might, nor by power, but by my Spirit, saith the Lord of Hosts’ [Zechariah 4:6], and they attributed all the spiritual renewal of their age to the mercy of God. In taking this view they understood at once that all the successes of the Reformation were repeatable — as repeatable as the victories of the apostolic age — for Scripture places no limitation upon the Spirit’s work of glorifying Christ and extending His kingdom.

Thus there was recovered at the time of the Reformation belief in what may be called revival Christianity, and the attention which the Puritans who followed gave to this area of truth profoundly influenced the following centuries and gave to the English-speaking world what may be called the classic school of Protestant belief in revival.” (Ian Murray)

Some pastors teach that revival is not necessary since Christians are already alive in Christ.  But they forget that even Christians can very easily experience a decay in their passion for Christ that used to be like a great fire can become just smoking embers among the ashes of past experience. Their people are not There may be a great intermission or formality in the discharge of commanded duty. The mind, which once with delight and admiration, could meditate upon God and Christ, and the covenant, and things that are above, may come to lose its relish for these things, and to dote upon the transitory fading vanities of a present world. The common gifts of the Spirit, through carnal ease, and defect of employment, may be in a great measure blasted: and, which is worst of all, the saving graces, and fruits of the Spirit, may come to be woefully impaired as to their former degrees and acting. But now, this partial death of believers, again, is twofold: there is a deadness which is felt by God’s people, and a deadness which is not felt; “gray hairs are here and there upon them, sometimes, and they do not behold them.” The Lord was departed from Samson, and he wist not, Judg. 16:20. But then there is a deadness which is felt, when God’s people have a sense of their deadness, and are lamenting it. And it is an evidence of spiritual life, or of some revival, when the Lord’s people are beginning to cry out with the church, (Psa. 85:6:) “Wilt thou not revive us again; that thy people may rejoice in thee? — Why hast thou hardened our heart from thy fear?” (Isa. 63:17).