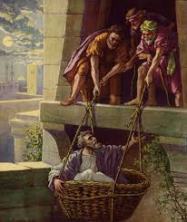 Paul was turned persecutor into persecuted. He who was once a terrorist was now a preacher.  Now he was on the other side and very quickly Paul got a taste what it was to be on the run from hostile anti-Christ crowds. At first they must have thought this was just another way to capture the Christians but then after a while they must have realized he was not pretending, especially when the people he was preaching to were getting baptized and converting to the way of the wonderful Nazarene. He was preaching the gospel so powerfully he was confounding the Jews and proving that Jesus was the Messiah. So the Jews at that time decided that he would have to be killed. A governor who was appointed by Aretas an opportunistic ruthless king of that area (so powerful he defeated Herod Antipas’ armies) assigned a garrison, to arrest and kill Paul (2 Cor 11:32-33).

But the followers of Christ in that city decided to lower him out of a window in a basket so he could escape. Much like Moses who escaped by a basket (Ex. 2:3-5) so Paul would escape with his life. It was not easy, it would have to be a big enough basket to lower a man who could have weighed from 150 to 180 pounds without dropping, injuring or killing him. But his life was like that, always in the balance. It would seem he was a preacher in a basket teetering on the brink of life and death every day.

Paul’s resume looked more like an intelligence report from the NSA in 2 Corinthians 11:16-33. People thought Paul was insane. He had to bear the weight of responsibility in taking care of churches which most likely gave him many sleepless nights. He lacked clothing, many times he did not have enough food to eat. He was in danger wherever he went.  He was in and out of prison and he was publicly beaten within an inch of his life by lashes and with wooden rods. Who know how many times he almost died. One time he was stoned and they thought he was dead and they dragged his body out of the city (Acts 14:19). He was shipwrecked and floated at sea for a day. He was robbed and almost drowned. He was persecuted by Jews and Gentiles and those who claimed to be Christians and were not. Eventually, according to tradition he would be decapitated for his faith in Rome. Yet he says, “But none of these things move me, neither count I my life dear unto myself, so that I might finish my course with joy, and the ministry, which I have received of the Lord Jesus, to testify the gospel of the grace of God.” (Acts 20:24).

What is my point? Here we have Paul writer of fourteen books of the New Testament who lived life on a razors edge. He was seen as a basket case (2 Cor. 5:13) because he saw his ministry as a fearful responsibility and knew the terror of the Lord (2 Cor. 5:11). Who are we to think we are any better than him? Paul’s problems were not random, he caused them! Paul had an energetic passion for Christ fueled by the Holy Spirit and this got him in trouble with the law and religious people more than once. Although he lived in purity, showed understanding, patience and kindness (2 Cor. 6:6-7) he was treated like garbage by the people of his day and he even saw himself as the scum of the earth (1 Cor, 4:13). He was treated like a nobody and some thought he was an impostor. This was the great Paul the Apostle.

Let me ask you a question? Are you gospel scum? Yes, I am serious. Are you greater than your Lord who was defamed and harassed? (Mt 10:23-25). While no one sees being irrational or mentally deranged due to delusion as glorifying to God-does the world system and backslidden church people see you as a basket case for the gospel? Is your desire to minister the gospel so motivating you are treated like garbage and even the enemy of the state? Has Pentecost “cost” you anything except sitting tired, yawning in a church or making a roast for pot luck suppers or having to teach VBS once a year?  You drink booze, dance, watch godless movies and then wonder at your ineffective witness-that is if you care. You commit adultery, divorce and remarry and then parade against the GLBT crowd. Ah we know how to crank out certain issues to get our jack in the box “amens” from the pew forgetting such were some of us! Self-righteous snakes and religious reptiles beware-only those forgiven much love much.

Maybe you are just a “nice” Christian? You are just so agreeable with everything and everyone. You hope people will accept your precious little faith and develop a taste for your lukewarm religion.  You don’t want to offend anyone and although you say you do not compromise the truth (which today means a firmly held opinion not fact) your words and actions reveal that you are a part time salesman and convert to the new discipleship that makes you a pleasant agreeable marketer attempting to populate your CEO’s church (what we used to call a pastor) with more clientele.

The gospel was a threat to all society especially the idols of established religion and false patriotism. The evil world system run so long by the prince of the power of the air Satan, greatest fears were realized with what Paul was preaching: CHRIST THE PROPHET, PRIEST AND KING was and is real and he was and is taking back what belongs to him. While it is noble to get people food, shelter and clothing-is it right that we infect them with a diseased form of Christianity?

The gospel Paul preached is diametrically opposed to the present evil age and the worldly religion of moralism, psychology and the philosophy of lawlessness. Real gospel preaching opposes all sin and anything that attempts to eclipse God’s glory and his way of salvation through the Cross of Jesus Christ. Preaching law offends the lawless. Preaching grace offends the moralist. Gospel preaching is not palatable to the world and what I mean by the world is not the lost and dying in this context but the world system intermixed among so called Christianity and a social, behavioral moral code gospel that is powerless to save.  Can you hear the satanic laughter at the futile efforts of today’s form of Christianity and evil runs amuck in our land, yes our world? Look, boy and girls- cowards never can serve God and are left outside heaven.

Before I close, you say that Paul was a special man? Not everyone is like him. True. Yet I wonder if he was so special why don’t you preach and emulate his teachings in context then? The book of Romans and the book of Acts should be side by side. One is elaborate Christ centered doctrine. One shows you the practical side of faith and what happens when you preach pure doctrine. Christianity is not a cultural experiment-it has already been tried and proven. Abandon, yes, repent with torn hearts of your religious tourism, marketing and souvenirs and just preach Christ (that is if you know him)!

If not, as always, in the foreknowledge and predetermination of God there is no lapse or mistake. Christ our master architect and builder will stand up! He does not give sleep to his eyes as he builds the church and will God will have a people for himself! He has heard the prisoners of sin groan and seen those on spiritual death row heading to hell and if these lukewarm people do not respond to the clear call of the truth-they will end up being castaways! He will raise up a people yet to be created that they may praise the LORD! These will be a people willing in the day of his power, full of the vitality and dew of heavenly youth.

May the Lord fill his basket with many who have the unleavened bread of sincerity in their hearts and feed the world with the bread of life-JESUS!

©2015 Rev. Stephen S. Gibney, give credit where credit is due